HRC was created to help bridge the large gap existing between scientific research in hydrology and applications for the solution of important societal problems that involve water.

The monsoonal period from the middle of June through the end of August 2022 saw unprecedented rainfall and flooding throughout Pakistan and eastern Afghanistan. The Hydrologic Research Center (HRC) has conducted a case study analysis using the Pakistan-Afghanistan Regional Flash Flood Guidance System (PARFFGS) products for the 25 th and 26 th of August 2023 (UTC).

The Flash Flood Guidance System (FFGS) designed by HRC has been tailored and implemented at the regional center in Pakistan for operational use (known as PARFFGS) to provide guidance toforecasters for flash flood occurrence. The implementation and associated training of forecasters was done in collaboration with the Pakistan Meteorological Service and the World Meteorological Organization, and was funded by the US Agency for International Development, Bureau of Humanitarian Assistance. The PARFFGS system covers the domain of the countries of Pakistan and Afghanistan.

Unprecedented persistent severe monsoonal rainfall amidst high temperatures during the period from 14 June to 30 August 2022 resulted in flash flooding, large-river flooding, glacial lake outburst flooding, and dam overflow flooding in most of Pakistan Provinces with deaths exceeding 1,000 people and very significant damage in the billions of US dollars. (See: https://reliefweb.int/disaster/fl-2022-000254-pak) The HRC case study examines the daily rainfall amounts and the model-forecast flash flood risk for the two day period 24-25 August 2022 throughout the domain of the PARFFGS. The details of the analysis may be found here (download 7MB presentation).

Both the observations-based rainfall and the mesoscale model forecast rainfall products in PARFFGS indicate very significant threat in large regions of Pakistan and eastern Afghanistan for the period 24-25 August 2022.

Using PARFFGS products, we find that the two mesoscale model forecasts agree generally with the observations on the daily scale for significant rainfall covering very large areas of Pakistan and eastern Afghanistan and, given surface soils that are saturated from prior events, they yield significant flash flood risk in these areas.

For these case study days and after the PARFFGS products discussed are validated with local-office real-time observations, warnings and feasible evacuations are warranted. 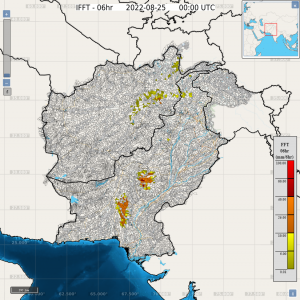 The combination of saturated soils and 6- hour observations-based rainfall produce significant imminent threat as shown in the Figure for two regions of Pakistan.