HRC was created to help bridge the large gap existing between scientific research in hydrology and applications for the solution of important societal problems that involve water. 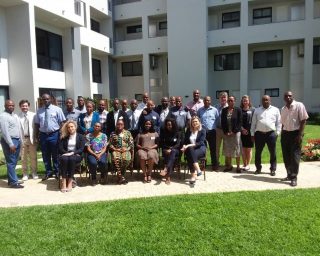 An initial training and coordination meeting was held in Pretoria, South Africa, (see picture) during the period 23-24 January 2020 with the goal to define the availability of real-time and historical radar precipitation data for their bias adjustment and incorporation into the Southern Africa Flash Flood Guidance System (SARFFGS).  The meeting also served as the first training session of the participating countries on the basics of radar operations and radar hydrology. Participants included National Meteorological and Hydrological Service (NMHS) representatives and radar experts from South Africa (Regional Center), Botswana, Lesotho, Malawi, Mozambique, Namibia, Eswatini, Zambia, and Zimbabwe. The main conclusion was that the countries strongly support the incorporation of quality-controlled radar precipitation into the SARFFGS as it would provide: improved detection of precipitation location for convective and orographically-triggered rainfall; improved estimation of precipitation magnitude with higher resolution; and will allow for higher resolution basins over the portion of the domain with radar coverage. The meeting identified nine operational S-band radars in South Africa, and a few other countries stated that they are about to install operational weather radars in the next year or so and suggested the relevant domains are incorporated in the enhanced delineations. HRC provided the list of data needed and standardized formats for the transfer of data. After the HRC effort to ingest the available radar precipitation data, a second training meeting will be held in the region to complete the training through hands-on case-study analyses.